Cocaine is a powerfully addictive drug that produces a euphoric high and may cause dependency in a short amount of time. Cocaine addiction can result after repeated use because of the deep-rooted effects that it causes in the brain. After use, the brain feels a sense of reward from the stimulation effects that cocaine produces and addiction occurs when the addict becomes dependent on that reward, even though negative consequences may occur. 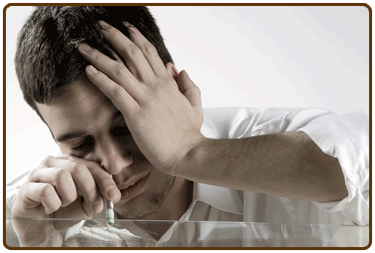 Get help from a rehab center to stop your cocaine addiction!

Many cocaine addicts also have a poly addiction to other drugs including narcotics, heroin, alcohol, or barbiturates. Cocaine rehab treatment may be necessary for some addicts to successfully recover from cocaine addiction and should be considered whenever the use of cocaine perpetuates undesirable circumstances within a person’s life.

Cocaine addiction is costly in so many ways. Not only is the drug destructive to one’s health, personal relationships, and finances, but, it plays an important role in the deterioration of one’s mental ability to cope with everyday issues in life and can have profound effects in many other areas of a person’s well being.

The abuse of cocaine, commonly, results in loss of interest in anything except the next dose and the anxiety is so overwhelming that most cocaine addicts feel an absolute need to use the drug before they are able to function with any normal behavior. This constant need begins psychologically, because of its reward sensation, and quickly becomes physical, making the effort to discontinue use all the more difficult.

Denials, guilt, anxiety, paranoia, erratic or bizarre episodes, and depression can alter the addict’s behavior to the point of irritation, aggression and violence, without any apparent cause. The desire to continue using, despite these negative consequences, can be attributed to the resulting effects on the brain and central nervous system as normal dopamine, norepinephrine, and serotonin levels are blocked and depleted. When these naturally occurring chemicals in the brain are disrupted, there is a myriad of other adverse effects that may result in permanent mental health disorders, including psychosis.

Memory loss, co-addictions, suicide, overdose, seizures, respiratory failure, heart failure, high blood pressure, and death are some of the other hazards associated with chronic cocaine abuse. Good news! Most of these problems can be reduced and/or alleviated by abstaining from cocaine use and participating in a cocaine rehab program.

There are many circumstances that may prompt the addict to consider cocaine rehab. But what else can determine whether cocaine rehab is necessary? According to the National Institute on Drug Abuse, cocaine addiction must be considered “a complex disease that involves biological changes in the brain as well as myriad social, familial, and other environmental problems.” For this reason, the treatment must be “comprehensive, and strategies need to assess the neurobiological, social, and medical aspects of the patient’s drug abuse.” The addict must ask themselves the following questions and decide how much they are willing to lose because of their addiction and how cocaine rehab can help them to recover their life.

Whenever cocaine use results in a negative circumstance it is wise to consider cocaine rehab.