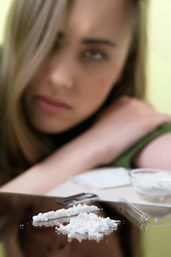 Treatment can help you overcome an addiction to cocaine. Know the symptoms!

As of 2008, the National Survey on Drug Use and Health reported a total 1.9 million cocaine users, of which 359,000 were crack users. Within these groupings, adults aged 18 to 25 outnumbered all other age groups as current users, with men outnumbering women.

Cocaine’s wrenching effects take root within the brain’s limbic system, a group of regions that regulate motivation and pleasure. The drug’s contact with certain brain cell receptor sites causes the release of dopamine, a primary neurotransmitter chemical. As dopamine chemicals build-up in the brain, users experience euphoria and increased energy.

1. Isolating from Friends and Family

As an across-the-board symptom of most any type of addiction, this symptom of cocaine addiction becomes more and more noticeable over time. Compulsive drug-seeking behaviors start to take over a person’s life once the need for cocaine takes over his or her mindset.

A person’s growing obsession with using gradually chips away at the amount of time he or she normally spends with friends and family. An addicted person usually develops a completely new group of friends or stays to his or herself for the majority of the time.

Excess amounts of dopamine in the brain create an energy surge that can easily keep cocaine users up all night long. After experiencing the drug’s desired effects, a person will most likely “crash” or sleep for hours on end.

Staying up well into the night hours and sleeping through much of the day may be a sign of cocaine addiction. Not surprisingly, this type of sleep schedule makes it difficult to hold down a job or maintain meaningful relationships for any length of time.

Cocaine acts as a central nervous system stimulant that speeds up most every major process in the body. As a result, users have increased metabolism rates as well as increased amounts of energy. This sign of cocaine addiction also results from an overall decrease in appetite. For someone addicted to cocaine, noticeable weight loss changes appear as a protruding collarbone, protruding wrist bones and eyes with an overall sunken, sickly demeanor.

A person can actually experience withdrawal effects when “high” once his or her tolerance for the drug reaches a certain point.

Cocaine can be snorted, smoked or injected, with each method leaving its own signs of cocaine addiction. Someone who snorts cocaine powder will start to sound congested, make frequent sniffling noises and have a runny nose much of the time. Smokers develop a gravelly voice tone and tend to cough on a regular basis. People who inject cocaine eventually develop track marks along their arms, hands and even feet.