How Does Cocaine Addiction Develop?

Cocaine addiction can develop very quickly. After someone starts to abuse cocaine, it can become addicting so much faster than they may realize. But how does cocaine addiction develop? And what causes it to happen?

There are actually many factors that influence cocaine addiction and the likelihood that someone will become addicted to the substance. As stated by the NIDA, “Genetic studies continue to provide critical information about hereditary influences on the risk of addiction to psychoactive substances, including cocaine.” It is still true that a person’s genetic background and makeup can influence their potential risk of becoming addicted to the drug, but there are actually other factors that are seen to be even more influential, such as:

It has only recently come to light how important these environmental factors are on affecting cocaine addiction risk. According to a study from the NCBI, “Data from twin registries, for example, suggest that a sizable portion of the variability in the susceptibility to drug abuse is due to environmental factors that are unique to opiates or to psychostimulants.”

Because of this, someone who has a higher risk of addiction based on environmental factors may encounter the issue of these factors “influenc[ing] gene expression and thus genetic risk” (NIDA). The two types of risks together make someone highly susceptible to cocaine addiction. 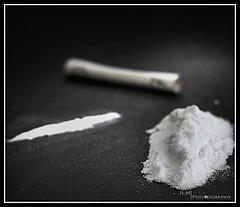 Cocaine has a unique impact on the brain that can lead quickly to addiction.

How Cocaine Abuse Affects the Brain

When someone starts to abuse cocaine, they are always at risk for addiction; some are merely more at risk than others. But cocaine affects the brain in such a way as to perpetuate addiction and habit.

The NIDA Teen states, “Stimulants like cocaine change the way the brain works by changing the way nerve cells communicate.” Cocaine causes a buildup of the neurotransmitter dopamine and “prevents the dopamine from being recycled” the way it normally would be. All of the dopamine that floods the brain after a person snorts or injects cocaine causes the high of the drug.

When a person abuses cocaine, the drug causes them to feel euphoria, high amounts of energy, and extreme pleasure. A person will want to feel that same effect again usually and will continue to take cocaine. “With repeated use, stimulants can disrupt how the brain’s dopamine system works, reducing a person’s ability to feel any pleasure at all.”

The Development of Addiction

A person who has been abusing cocaine chronically will start to feel pleasure only from cocaine. And they will need more and more of the drug over time in order to just feel the same effects as before. Some people say that they spend a long time abusing cocaine just trying to find the same high that they originally felt.

Chronic cocaine abuse will cause a person’s entire life to become about cocaine alone. Based on regular cocaine abuse and a genetic and environmental disposition that breeds it, addiction can develop so quickly, especially in those who are highly susceptible to it, that the person may not realize it until they are already in trouble.