Recognizing Cocaine Addiction Behavior in a Loved One

As a person increasingly becomes dependent on cocaine, many noticeable changes begin to take place. Over time, these changes can become more serious and the cocaine addict may develop risky behaviors that, not only, affect themselves, but, may have profound effects on their family, friends, and the general society. Recognizing cocaine addiction behavior in a loved one, can, significantly reduce the damages that result and early intervention can be a powerful key to treatment. Intervention and support of loved ones can make a tremendous difference in whether or not the addict gets the treatment that they need. 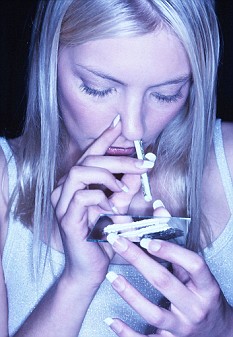 Knowing the signs of addiction will help you get help for your loved ones.

Not everyone uses cocaine the same way. It can be snorted, injected, or smoked as crack and the effects of its use will vary accordingly, and by the individual. Cocaine is a powerful stimulant that affects the brain and central nervous system. Some physical signs may be short term and some are significant. It raises the heart rate, increases blood pressure, dilates pupils, and produces symptoms of pleasure, euphoria, mental alertness, energy, and sensitivity to light, sounds and touch. Cocaine addiction behaviors may become physiologically dangerous as the addict’s health deteriorates, hunger and sleep decreases, or the addict participates in risky behaviors such as unsafe sex, abusing other drugs, overdosing, or ingesting unknown chemicals.

• People who snort cocaine may have frequently, runny or bleeding noses, sniffles, stuffiness, chronic sinus inflammation, or traces of white powder or crustiness around their nose. They may develop a wholes or deviations in the nasal septum which can lead to other physical defects.
• Those who smoke crack may develop a chronic cough, shortness of breath, coughing up black mucus or blood, or more serious lung problems.
• Injecting cocaine intravenously, may leave “tracks” or puncture marks and bruises, usually, on the arms. The injection sights may also be on other hidden areas of the body as an effort to hide the abuse. These addicts are at the risk of infections and communicable diseases such as HIV and Hepatitis.

Some behavioral changes can be recognized immediately with cocaine addiction while other behaviors may be presented over time. The effect of increased dopamine released to receptors in the brain gives the addict a feeling of pleasure and euphoria. After repeated use of cocaine, the normal production of dopamine diminishes and changes the way nerve cells communicate in the brain. This can result in a rash of unwanted behaviors, cognitive defects, loss of memory and mental health disorders. No one is immune to this addiction. According to a report by the National Institute on Drug Abuse, in 2011, “most people use drugs for the first time when they are teenagers” and “drug use is highest among people in their late teens and twenties”. Trends also show an increased usage among people in their fifties. The addict may exhibit cocaine addiction behaviors of:

• Hyper and increased activity and talkativeness
• Impulsive decision making
• Anger, aggression, violent or erratic behaviors, fluctuating mood changes
• Dishonesty, denial, or secrecy regarding finances, and places where they have been or what they have been doing
• Overly protective of privacy and contacts, associating with new friends or others similarly addicted
• Nervousness, restlessness, anxiety, irritability, paranoia, and panic, psychosis, and delusions
• Bouts of lethargy, depression, or intense sleepiness and fatigue after prolonged or large amounts of use
• Neglect responsibilities regarding family, work, social environments, and personal hygiene
• Resort to acts of theft, selling personal items, or seeking unusual means to fund the habit because cocaine addiction is expensive
• Commit crimes and be easily persuaded by other addicts to engage in illicit activities

Cocaine addiction behaviors lead to many other consequences, but with treatment, there is hope for recovery.