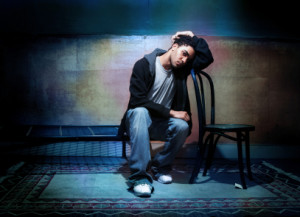 The first stage of cocaine withdrawal is the crash.

The crash phase occurs after the person stops taking cocaine when they have been chronically abusing it for at least a few months. According to the ADF, this phase is characterized by most of the strongest symptoms in cocaine withdrawal, including:

This crash period may last for a few days right after the person stops taking cocaine. The person may also exhibit a “decreased craving to use” during this period. Many of the side effects of cocaine abuse, like insomnia and decrease in appetite, will subside and be replaced by their opposites. For someone who has been on cocaine for a long time, it will be a shock to the system.

The second phase is called the withdrawal phase and it can often last “for up to 10 weeks.” It can be a very miserable time for a cocaine addict. This phase is characterized by:

During this phase, a person could also become very unhappy and “delayed depression” can even set in, according to the NLM. During this time, a person may be able to cope with the depression some days but others can be very hard. This is why the person should be in some sort of therapy or rehab in order to work through the issues of the cocaine withdrawal syndrome and to not slide backward into relapse.

Cocaine withdrawal is very difficult, and this stage can last a very long time. The issues like craving, depression, and irritability actually “rival or exceed that felt with other withdrawal syndromes.”

The extinction phase is the third and final phase of cocaine withdrawal. It is characterized by “intermittent craving to use in the context of external cues” (ADF). This by no means suggests that the extinction phase is easy or that it ends quickly. Some people may feel that they spend years in this phase.

For many former cocaine addicts, there are so many cues and other stimuli that may affect their progress. Some cannot drink coffee or other common beverages containing caffeine because the jitteriness reminds them of a cocaine high.

This phase can last a very long time. If a person does relapse as a result of it, it does not mean that they have failed but just that they must continue to work on recovering. Cocaine withdrawal is a long process with three very difficult and drawn-out phases that rival any other type of withdrawal syndrome’s.